Mrs. B from Royersford called yesterday concerned about her douglas fir trees. She told me one was turning brown at the top, and also the white spruces didn’t look so good. She reminded me that I had sprayed them to control a disease problem a few years ago and was wondering if maybe they had the same problem again or maybe bagworms or something. As soon as I saw them I knew that it was neither of those problems. I explained to her that similar symptoms on different species most likely indicated an abiotic problem, not a disease or a pest, which are usually host- specific. The way the young growth of the doug firs was wilted and killed made me think of herbicide poisoning. In fact, it looked exactly like the symptoms of poisoning from Imprelis, Dupont’s new turf weedkiller. 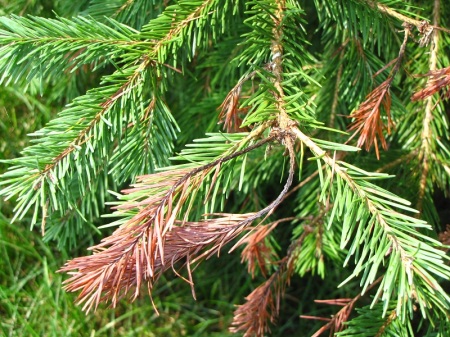 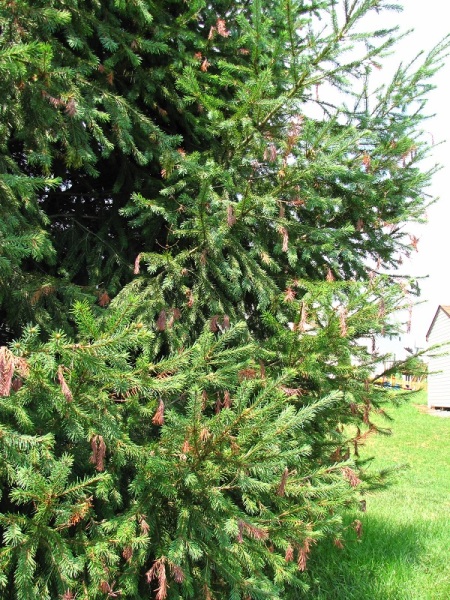 The story of Imprelis is a really interesting one, and it is soon going to be big news. Heres the condensed version. Last year Dupont introduced this completely new product with great expectations for its potential. It is extremely low in toxicity to humans and at the same time very effective at controlling broadleaf weeds. So it was immediately popular. But this spring, all over the country cases of dying evergreen trees were being reported, mostly white pines and Norway spruce. And it wasn’t long before it became evident that there was a connection between these injured trees and Imprelis herbicide . The thing that these mysterious cases all had in common was the turf around them had been treated with Imprelis. Dupont initially did not acknowledge responsibility, but just last week they pulled Imprelis from the market. I’ll try to get some of the news articles and Dupont’s statements up here soon.

Anyway back to Mrs. B’s trees. I told her my suspicion. She said “but I have a lawn company that just uses organic treatments.” I responded; “maybe so, but there are NO weeds in your lawn. There is no organic weed control that is truly that effective.” I suggested she call the lawn company and ask them what chemicals had been applied. And told her to google “Imprelis.”

Then I left to go visit another client. Before I even got to Limerick, Mrs. B called me to tell me what happened. She had called the lawn company as soon as I left, and they were completely upfront with her. They acknowledged that they had applied Imprelis on June 13. And they now know there is a big problem., and want her continued feedback.

Do you note the irony here? A person thinks they’re being environmentally responsible by choosing the supposedly “organic” option, and this is what happens to them. Drag.